The light flickered on unwillingly after its usual 12hour demise. These were hard times where everything was out of line. Things had fallen apart and mere anarchy had replaced order and sanity. Streets and street corners were filled with ebony black darkness through which the feeble light of a torch could not even cut.

He’d been up scheming all night. His blood shot eyes revealed inadequate sleep and determination. Through the heat and rampant mosquito swatting he’d sat and planned out exactly how he was going to carry out that action.

With giant steps he made his way to the bus station. One look at the man’s face told everyone not to mess with him. The bus conductor had only begun calling for the fares of those headed in the church’s direction when the man blurted out the need to turn down the volume of the damned bus radio! The menacing tone of his voice alone coupled with the Crimson red of his eyes told the driver to not argue but do exactly as told.

This was the third time the conductor had signaled to the man to pay up his bus fare. The hint of irritation in the conductor’s voice surfaced more than ever before. This forced the silent man to respond.

‘No, you need to hand it here and now before you get to the Church stop’

‘Did you not hear what I said? YOU CAN NOT HAND THE MONEY WHEN WE GET TO CHURCH STOP, IT SHOULD BE HERE AND NOW’

The previously servile and willing driver had suddenly morphed into an angry ogre. He stopped the vehicle and was in the man’s corner within a split second. Together with the conductor, they made to aggress the man. Onlookers gathered and in what seemed like a flash, the aggressors had now taken to their heels, shrieking dangerously, arms flying, ‘HE HAS A GUUUUUUUUUUUUUUNNNNNN’

The man did have a gun, a thick ak47, practically the most popular type in Ghana, and was headed for the Church. His plan of action was carefully planned and was indeed simple; to give the president three shots in the head; one for the DUMSOR, two for the resultant crippling of the economy and three for his son who had passed away after having received blood that was congealed and contaminated in the hospital refrigerator also due to the same DUMSOR!

‘My son is mentally deranged! He dares not assassinate the president, he’s lost it, pardon him, a mad person can not go to jail just like that, mercy! Reduce his sentence, he deserves to be treated at some far off asylum, or maybe at home, in the loving and caring hands of relatives who can help him get back on his feet, this is a mistake!, NO!’

These were the melange of protests , pleading and counter arguments the mother of the gun  man presented. The man’s mother had every reason to cry, her son had just received a ten year jail sentence, one of the fastest rulings ever passed in the Ghanaian courts and all for attempting to assassinate the President. How we wish other matters of national interest that needed legal attention would be handled as fast as this one.

‘I am ready to die!’ He bellows. Like anyone cares I retort mentally as I roll my eyes. People scramble for life everyday in unstable countries and you blatantly stand here and announce your readiness to die. By all means take the lead, and do not forget to remind us to invite beggars to come get ‘small chops’, hoards of sachet water and drinks from your burial thanksgiving ceremony. ‘ I am fifty eight years and have lived a full life; I am not afraid of death! I have absolutely nothing to lose! When Kwame Nkrumah was building the port city of Tema and placing us in sustainable employment in factories where were you?!’ He continues these rants for what seem like a decade amidst spittle, sweat and foam that gathers at the sides of his lips. This foam! Eww! I can’t stand this foaming. The sight of it makes me sick and I will Myself to clear the image from my graphic mind lest it reappear while I eat later in the day.

‘Look man, you must control yourself and be disciplined, you can’t shout and make all of us this uncomfortable, if you hate the dead goat that much go and attack him personally instead this of gusty portrayal of plain cowardice and frustration’. This makes the old man really angry. He jabs at the younger man’s shoulder and makes to physically engage him. People tear them apart and the angry words continue. ‘Your kind is the group of young kids who die early, 25 years, plastered  on the wall, smiling from an obituary. A still image trapped in time and eternity because yours is the type that keeps up appearances and fails to admit when they are suffering. You sit frozen like statues never admiting your suffering and smiling forced smiles because you are too ashamed to say you are broke. The Dead goat is strangling us and may all who fail to overtly admit it die along with their pretentious lifestyles.’ 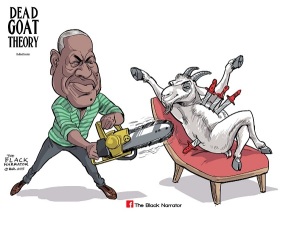 ‘All you do is sigh and sigh and sigh, no action taken, chin in hand ; all lukewarm like porridge that will grow cold and eventually get chucked. ‘

I can’t help but stifle a laugh; the young attacker of the elderly man is quiet for a moment…

He freezes as he clutches his antiquated iPhone 3 even tighter.