Before falling into the temptation of providing a definition of feminism and its attendant compulsion to be bound by the definition, I would like to use this post to help our new generation of feisty lady feminists understand that feminism is not only limited to the literal fight against the male species.  The ideology is not a mere reduction to whether we are better than men or an unnecessary desire to be at par with them constantly.

Feminism is intellectual and subjective and like all other discourses and opinion, you must examine it for yourself (esprit critique) before you get lost in the all attractive tendency to base your whole life and line of thought and argument on only a distorted aspect of the idea. We are so quick these days to get so defensive over our nature as women and what men do or do not do and then run to the umbrella of feminism for justification.

Just because Descartes preached the need for critical thinking, independent thought as well as skepticism does not mean I jump on the bandwagon and live a life of complete skepticism of everything I am presented with.  To start off, the term feminist isn’t even African. In that sense, we can argue that the concept is lacking in addressing the African woman’s unique struggle. What I am driving at is the fact that before we get too quick to prescribe solutions or adhere to schools of thought, consider your own unique situation and apply your subjectivity. I love Ghana Feminist blog because the curators identify that the concept is a huge foreign umbrella that needs to be tailored to the Ghanaian woman’s unique situation. Ideas are appealing, they are the foundations for thought. If you accept an idea for what it is and remain only at foundation level, without building on it or questioning it and more importantly adding your own subjectivity to it, you go no further than a building stuck at foundation level.

Chimamanda in her Feminist Manifesto argues that girls need not spend too much time on their hair because while we do that, our male contemporaries may be using that time to self-develop. Though I adore Chimamanda, I am not obliged to prescribe to every thought she presents, though she is a force to reckon with in academic conversation.  In that sense, I as an individual with reasoning capacity will, examine the information presented and see if that opinion works for me. After all, though Chimamanda and I share a common sex, we cannot lump our experiences as women from two entirely different cultural heritages, ethnicity and nationalities, experience, etc together and claim to have a common world view. Surely based off of all these variables, we are different. The thing with our generation these days is that we’re quick to jump on bandwagons and adhere to opinions without thinking in-depth. One of the reasons for my disinterest in online debates is the fear of saying something stupid and distorted that would come back and haunt me. I intend to lean on one recent online conversation to push the argument that

I will make reference to one online conversation to build my claims; more specifically a recent reaction to a Nigerian talk show on Youtube called ‘King Women’ on Twitter.  A friend sent it my way and I hated the title immediately but then I loved the show and the idea of celebrating women’s success stories. I questioned the idea of female success being tagged with the crux of male success or dominance. Why couldn’t the show be called ‘Queen Women?’ or something feminine at least? We went on and on over this and I doubt I accepted his views though I made comments that demonstrated I had. I’m still thinking about his comments.

In one of the episodes, a successful Nigerian lady architect mentions that there is a difference between being submissive and obeying in marriage. 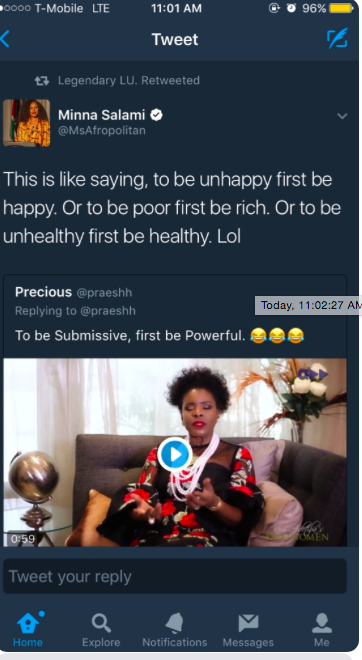 She further explains that submission is about the possession of power but the decision to relinquish it. Obeying is powerlessness and unquestioned compliance. I agreed with this paradox of power and submission. She gave the example that if a woman has the same economic power as her husband and decided to travel and the husband asked her not to go, and she granted his wish, that was submission. The fact that she has the power to make her trip happen but deciding not to because he asked. The contrast with sheepish obedience though is being powerless (in this case economic) and obeying simply because you have been told not to travel.  (And actually not having the means to go anyway ) If you listen to this part well enough, you would realize there is an underlying message of the need for feminine economic independence. 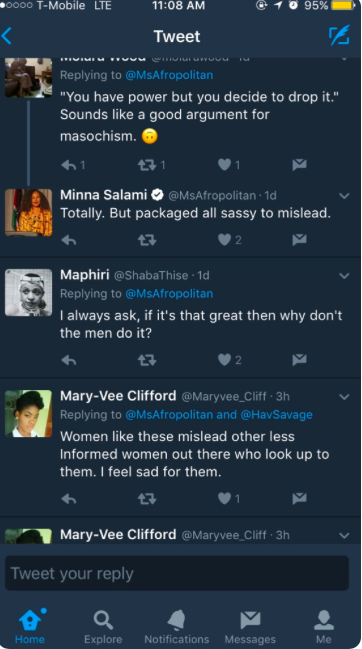 Though the message of submission has been distorted in our African society with the sad backing of religion and made to appear as a term that only applies to females, I think it is also very much applicable to males contrary to popular belief. Moving away from the gender conversation, if a human loves you, they will ‘submit’ to you. All we hear is wives submit to your husbands’. I do not blame some women for clinging onto what society feeds them. However, the fact that society feeds our thoughts and perspectives does not mean subscribe to everything it tells you. Matter of fact, submission does not mean lay down and be a doormat ladies! Both humans can submit to each other if it works for them. For women such as Jumoke , her subjectivity and personal interpretation of a word ( that sadly connotes being a doormat in society) allows her to navigate her relationship with her husband. Why then will other women come online and rubbish or disagree with a concept that they may not have fully explored or personally analyzed for their own unique situation(s)? Jumoke’s definition of feminism is different and works for her. She is successful and confident enough to share an opinion that she is entitled to. One of the online commentators wrote  ”Women like these mislead other less informed women out there who look up to them. I feel sad for them.” What I think is that no one needs to allow themselves get misled. First of all, you do not have to subscribe to everything you are fed. #LessonOne. Rather cultivate the habit of independent and subjective thought and then you won’t be misled. Also, there is no need to lose emotions. Be sad for causes that need sadness. 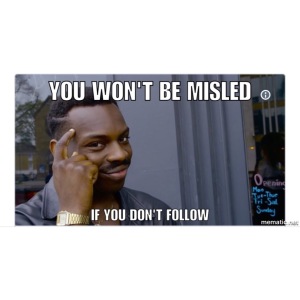 In conclusion, I will copy and paste my three motivations for writing this post.

Here is the entire conversation